Not all standards are created equal!

Karl Fischer titrations are an excellent and convenient way to determine the moisture content in a variety of samples. By nature, the titrants and solvents involved in the Karl Fischer reaction attract and react with water. This means any water – the water in your sample, the water from atmospheric humidity in your glassware, and the water in the air in the head-space once you open a bottle of titrant. Therefore, it is extremely important to standardize your Karl Fischer titrant prior to use and/or regularly. Since you have to standardize your titrant, what standard should you use?

What Are Karl Fischer Standards?

Karl Fischer standards are certified chemicals with a fixed water content that can be used to standardize (determine the true value of) Karl Fischer titrants. There are several types of standards: tablet, powder, liquid, and ampoules.

If you have run standard titrations before on a potentiometric titrator, there is a chance that you will have been told that your particular titrant doesn’t need to be standardized. Karl Fischer titrant is not necessarily as robust and as shelf stable as other titrants. This is due to the fact that they interact with water. Ambient atmospheric moisture is enough to cause the titrant to lose potency. It is very important, especially if a bottle of titrant has been opened previously, that it is standardized prior to use. Otherwise, the value that is in the titrator for the titrant strength will not be true, and that will lead to inaccurate results.

There are many things that people think about when trying to decide what the best option is for them and their specific application. One of the top ones is definitely cost. How much should the standards cost? What is the cost per test? Which type of standard is the most economical? Well, let’s break it down. Generally speaking, per test, from least expensive to most expensive the standards are sodium tartrate (powder), liquid (in a bottle), and then ampoule. Tablet standards are new to the market.

What’s The Difference Between Standards? 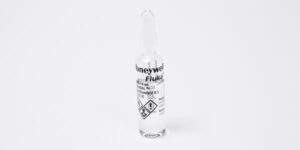 The second thing to consider when choosing your Karl Fischer standard is accuracy. From least accurate to most accurate are: powder and/or tablet, liquid, and then ampoules. Which one is right for your application? All of the charts below show the repeatability and accuracy of the standards as run on Hanna Instruments Karl Fischer titrators. Check out below.

Solid or powder standards are typically made from a chemical called sodium tartrate dihydrate. It’s an inexpensive non-hygroscopic free-flowing powder. This type of standard should only be used on a Karl Fischer system that is using a titrant with a strength of 5 mg/L. The strong titrant strength is needed due to the high water content in the standard. Even with the higher strength of the titrant, you would still need to use very small amounts of the standard (0.05g to 0.10g), otherwise, you could exhaust the titrator cell. The high water content paired with the standard being solid also means that it can only be used on a volumetric titrator.

Sodium tartrate dihydrate has limited solubility in methanol, a key component in Karl Fischer chemicals. In other words, not only do you need to use very small amounts of the standard when running it due to the high water content, it’s to not exhaust the cell. The solvent capacity for this standard is only around 2g per 50 mL. If your method calls for ketone/aldehyde reagents or ethanol-based reagents then this standard will not work (it is insoluble).

Liquid standards are a mixture of xylenes with a fix water content. These are typically in small bottles, and should be stored in a flammables cabinet. This type of standard is soluble on most solvents. Costs are middle of the road for this standard. The liquid standards are less exact than ampoules, but more exact than solid standards.

Ampoule standards come in a variety of concentrations, and are the most accurate water standard available. They are also the most expensive. The mixture of xylenes in the ampoules is certified with a fixed water content, and designed for single use. These standards can be used in both volumetric and coulometric titrators.

Tablet standards are single use, compressed, solid water standard. The tablets are designed to be used in volumetric titrators. These NIST traceable are miscible in Karl Fischer reagents, and have good repeatability and accuracy. They are also the newest to the market.