Olives have been coveted throughout history both as an edible fruit and for the health beneficial oil that is pressed from them. The edible olive has been cultivated for at least 5,000 years and today is one of the most widely cultivated fruits in the world.

Olives, however, require an extensive curing process to go from the tree to the table. Edible olives, also known as table olives, are classified into three groups according to the degree of ripeness at time of harvest: green olives, picked when they have obtained full size, but before the ripening cycle has begun; semi-ripe olives, picked at the beginning of the ripening cycle when the color has begun to change from green to reddish-brown; and ripe olives, picked at full maturity and are typically shades of black and brown.

When raw olives are picked from the tree, they are hard and very bitter due to the presence of harsh phenolic compounds. The curing process assures these unpalatable phenolic compounds are leached out and broken down; the process is also responsible for generating favorable metabolites from bacteria and yeast such as organic acids, probiotics, glycerol, and esters.

Brine solution consists of water, salt, and occasionally oil; the concentration of the brine solution depends on the type of olive being cured, and the point at which it is used in the curing process. If too little salt is present in the brine solution, there is a risk of unwanted bacterial growth while olives are soaking. Conversely, too much salt can over soften the olive skins.

Green olives typically start soaking in a brine solution consisting of 10 to 14% sodium chloride (NaCl) while ripe olives start in a brine solution of 8 to 10% NaCl. Salt is absorbed into the olive skins during curing, causing the salt concentration in the brine tank to decrease and eventually stabilize. If the salt concentration drops below a certain threshold, typically 4 to 6% NaCl, more salt must be added.

After curing is completed, olives are rinsed with clean water and then packed in jars containing 8 to 11% NaCl saline solution.

An olive producer contacted Hanna Instruments for a quick and accurate way to monitor the salt content of their brine tanks. The customer was currently monitoring their brine concentrations using a manual refractometer but wanted something with faster response time and higher accuracy.

The customer also valued the one-point calibration with deionized water and fast 1.5 second response time that allowed for a quick assessment of the conditions of their brine tanks and make real-time corrections if necessary. The IP65 water resistance rating and stainless steel sample well provided the customer with the required durability for the processing floor. Overall, the HI96821 provided a comprehensive, invaluable solution for the customer’s brine testing needs. 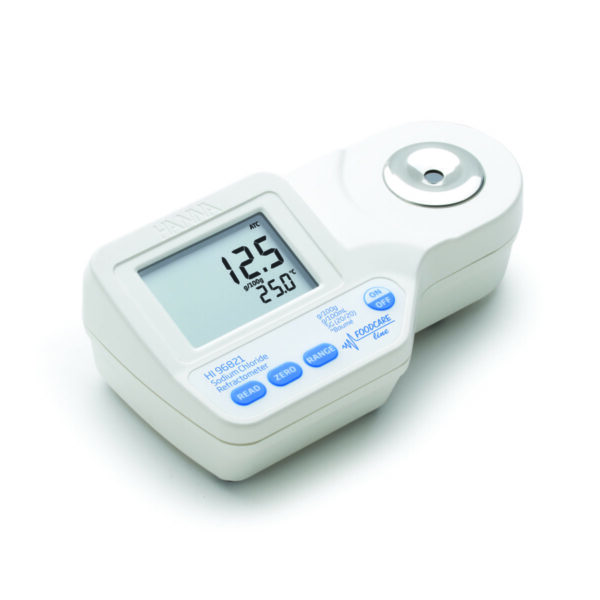